When Catherine Stutts planned her wedding, she wanted every element sourced in the Charlotte, North Carolina, area. She met with a few florists to talk about the flowers, but wasn’t satisfied. So, she searched the N.C. Department of Agriculture website and found a list of flower farms. After visiting Commonwealth Farms in nearby Concord and chatting with owner Jane Henderson, Stutts found her flowers.

“Seeing her farm, I could see that she had planted each flower and cared for them,” said Catherine (now Mahoney). “It’s a craft. Each flower became that much more special to me.” 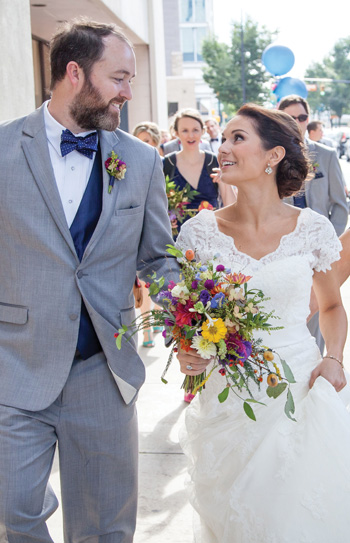 Unfortunately, not every bride or flower customer is so tenacious about local blooms. The local flower movement is relatively new, coming on the heels of the local food movement. Most people still don’t scrutinize the source of flowers or make it a priority as Catherine Mahoney did. My own millennial niece in Denver was gung-ho about a purely locally sourced wedding. Then, she fell in love with the king protea flower and made the import the focus of her bouquet. Recently, a millennial friend asked me for guidance on flowers for his upcoming nuptials. I asked him if locally grown was important. “Oh … no … well, maybe.” It hadn’t occurred to him, and that is illustrative of a primary goal of the current movement: awareness.

There has been considerable progress on the awareness front. National, regional and local newspapers and magazines are covering the local flower movement. An article in The New York Times about a White House dinner and another about a luncheon in honor of Michelle Obama specifically focused on the U.S. sourced centerpieces. Campaigns such as the Association of Specialty Cut Flower Growers’ (ASCFG) “Flower Bucket Challenge” and Slow Flowers’ “American Flowers Week” each July encourage people to buy local flowers and post photos on social media. As a result, hundreds of thousands of photos featuring armfuls and buckets full of colorful flowers ricochet around the country and beyond. Stories are generated in large and small media markets. Ditto expanded media coverage as a result of the Field to Vase dinners at flower farms around the country sponsored by Certified American Grown Flowers.

The local flower movement is progressing on a national platform and on a more organic, grassroots level of alliances — formal and informal — among flower farms and farms that grow flowers as part of their mix.

Debra Prinzing, a leading local flower advocate, creator of Slow Flowers, and author of Slow Flowers and The 50 Mile Bouquet, travels far from her Seattle home to promote the movement. We can forgive Prinzing her frequent flyer miles and carbon footprint as she reduces others’ by increasing the purchase of local blooms. Last month, she visited North Carolina to rally flower farmers.

On September 18th, she visited the Durham, North Carolina, area where about two dozen flower farmers and floral designers from North Carolina, South Carolina, Tennessee and Georgia converged at Jonathan and Megan Leiss’ Spring Forth flower farm in Hurdle Mills, N.C.  Under a tent, next to rows of mountain mint, blazing orange celosia and other flowers, Prinzing lead the farmers and designers in a lively exchange which resulted in new relationships for buying from and referring each other, and the sharing and commiseration that farmers need. Several farmers discussed plans for a new Durham area wholesale flower cooperative. The next day, Prinzing co-lead a design workshop at Pine State Flowers, where she helped the farmers and designers develop unique branding.

From Prinzing’s birds-eye view, partnerships among flower farmers are popping up around the country. Some are formidable, such as the Seattle Wholesale Growers Market, a cooperative uniting 13 Pacific Northwest flower growers to leverage sales and marketing to wholesale, retail and public customers. Thanks to two large U.S. Department of Agriculture grants, the cooperative has ramped up its activities with full- and part-time employees.

Others alliances are small, more loosely organized, but gaining traction. This winter, a group of South Carolina flower farmers gathered at a potluck lunch to chat about combining forces and the South Carolina Upstate Flower Farmers was formed. A wholesale availability list updated weekly on the group’s website (scupstateflowers.com) allows florists and other customers to shop at nine farms and pull from multiple farms for large orders. In July, the South Carolina Upstate Flower Farmers celebrated American Flowers Week by hauling bucket after bucket of flowers to a design studio in West Greenville, S.C., and inviting florists to go wild making arrangements over wine and snacks. “The best thing that came out of this evening together was the sense of the creation of a floral community,” blogged Southern Wild’s Julie Hill, a landscape designer and urban cut-flower grower in Greenville.

Also this winter, 50 members of the Ohio Flower Farmers met in the barn at Sunny Meadows Flower Farm in Columbus. Susan Studer King, a farmer-florist at Buckeye Blooms in Elida, Ohio, stepped up to handle administrative tasks and “herd the cats.” She created a member directory and Google map that pinpoints each farm to make it easy to refer each other when a customer is closer to another farm.

Below, Mindy Francis and Josh Staton of Morning Sun Flower Farm in Hamilton, Ohio, at a gathering of Ohio Flower Farmers. 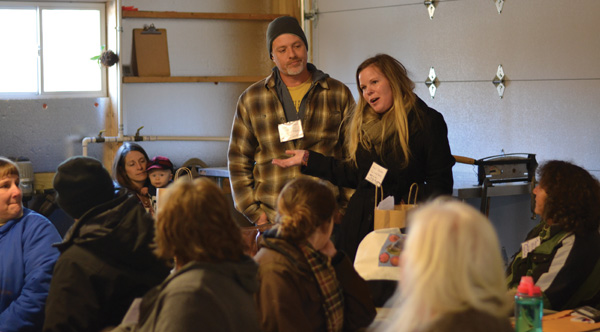 An Oregon group, Pacific Northwest (PNW) Cut Flower Growers, like Ohio’s and others, uses a closed Facebook group to communicate. Most also belong to a national “Flower Farmers” group on Facebook, and Prinzing created “The Slow Flower Community” group. The Oregon farmers use the Facebook group and Google spreadsheets to coordinate group orders of plugs, bulbs and seeds so smaller farms can buy parts of trays or crates. That way, a small operation can get funky new lisianthus colors that are only available with large orders. The group rallied around a first-year farmer in Bend, Oregon, who lost nearly all her crop in a late frost this year. Other farmers either provided flowers or sponsored a week to keep her CSA flower subscription going. Erin McMullen at Rain Drop Farms in Philomath, Oregon, said the group led three packed cut flower sessions at Oregon State University’s small farms conference this past winter and is invited back.
Instagram, Facebook and other digital communications tools are an accelerant in the local flower movement. Growers and designers use Instagram to draw customers in with compelling photos of offerings and activities at the farms. It helps cultivate a brand. “More than Facebook or Twitter, Instagram is reaching consumers and florists hungry for beauty and flowers,” Prinzing says.        Indeed, on July 17, Erin Benzakein at Floret posted an Instagram image of herself at the back of a pick-up truck full of colorful dahlias and got 29,684 likes and 695 comments.

Benzakein emphasizes that all marketing should show the face of the farmers. “I found what connected with people was they were grown by a real person, by a family farm, sharing our story,” Benzakein said.
Jennie Love at Love ’N Fresh in Philadelphia points out that social media is great for hitting a wide audience, but she encourages face-to-face interactions. “Good old-fashioned networking can go a long way, “ Love says. “Talk to everyone you can about what you are doing and why it is important.”

Below is the post by Erin Benzakein of Floret Flower Farm (@floretflower) that got over 29,000 likes on Instagram. 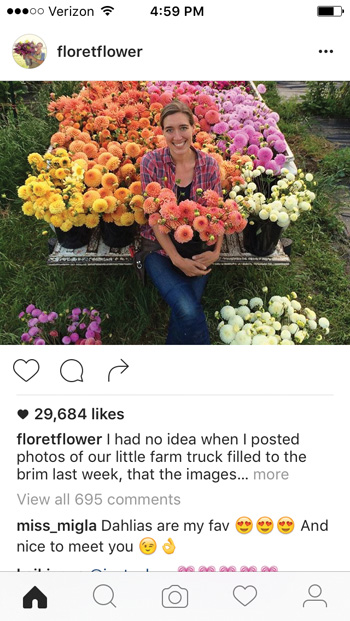 Let’s face it, some cities and towns embrace the local economy more readily than others. Love said Philadelphia has always been a progressive city that supports small businesses and locally grown and made. “It wasn’t a hard sell to get people interested in locally grown flowers at our farm when we started in 2009. The interest has just kept growing over the past seven years and shows no signs of slowing down,” she said.

A number of organizations promote local flowers, and Love sees some confusion between American grown and locally grown flowers. “I think it’s important not to muddy the waters for the average consumer and keep the message focused on finding a local farm near you, so your purchase power goes toward supporting your community.”

Kasey Cronquist, CEO of the California Cut Flower Commission and Administrator of the Certified American Grown Flowers program started in July 2014, argues for a movement beyond local boundaries to steer consumers to regional and U.S. grown flowers when local farms don’t have blooms to sell. “When the local producer goes out of season, you’re not leaving the consumer base without flowers,” Cronquist says.

He says becoming Certified American Grown, which is guaranteed through audits, is a service to wholesalers. He sees wholesalers increasingly separating flowers in their coolers by local, state and nationally grown to make it easy to pull them when florists, designers and other customers request them.

To date, 54 farms in 16 states are Certified American Grown. Despite the word “American,” certification is only offered to U.S. farms. Fees range from $25 a month for a micro farm with sales up to $100,000 up to $150 a month for growers with sales of $1 million or more.

Already, the red, white and blue Certified American Grown logo is showing up on sleeved bouquets at Whole Foods, Trader Joe’s, Safeway and regional grocery chains. Labels are coded with the state and specific grower.

The California Cut Flower Commission recently initiated an audited sustainability certification for a growing number of customers who insist on sustainable farm practices. The program, Bloom Check, will open to all states as it grows. So far, seven California farms have been certified.

Individual farms also create their own point-of-origin labeling. Prinzing noted that some farms use “Grown in [state]” graphics modified from state Department of Agriculture logos developed for food. “Don’t wait around for someone to label your flowers, take control by creating your own brand identity for the flowers you grow,” said Prinzing.

Slow Flowers has free, downloadable marketing material such as graphics for labels, post cards, informational graphics, and articles to share with local media. Slow Flowers’ online directory (fee based) includes growers, florists, studio designers, wedding and event planners, and even supermarket flower departments committed to American grown flowers. To date, there are 700 listings in 48 states and 3 Canadian provinces. Farmers and designers can sign up for a basic listing or a more robust, premium listing. Check the website (below) for current pricing. Slow Flowers doesn’t take a cut of commercial transactions generated by the directory. Slow Flowers designated and heavily promotes the first week of July as “American Flowers Week” to provide a prominent stage for local flowers outside of the iconic Valentine’s Day and Mother’s Day.

ASCFG also connects customers to flower growers and designers through its directory. Behind the scenes, ASCFG has helped incubate and move forward the national and local flower movements. Members recognize that ASCFG creates a big family of flower growers, designers and specialty suppliers throughout North America. Ohio flower farmers who’d never met before the 2014 ASCFG national conference in Delaware, huddled there and floated the idea of the regional group. “We had to drive to the East Coast to meet other Ohio people,” Studer King said.

ASCFG members and officers, and the large flower constituencies in California, Alaska and Florida, are integral to Certified American Grown Flowers and its programs, including forceful lobbying in Congress and the White House along with the Cut Flower Caucus it created among Congress members. Right now, the caucus has 30 members. Cronquist urges all growers to check voteforflowers.org to see if their Senators and Representatives are onboard, and if not, call and email them.
Love says ultimately there needs to be a push for more flower purchases in general, which would help all farms and provide traction for the local flower movement. “It is still very hard to make money as a flower farmer because there just isn’t that much demand for ‘everyday flowers.’”