Home Archive Introducing the inventor of the greens harvester

Introducing the inventor of the greens harvester

The Quick Cut Greens Harvester was developed by Jonathan Dysinger, who was 15 years old at the time he started working on the design. Now, at age 19, he is building a business to manufacture tools for small farms. 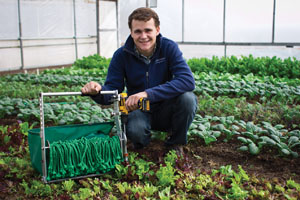 The story behind this young man’s invention began at his family’s farm, Bountiful Blessings Farm in Williamsport, Tennessee. The Dysingers grow vegetables for grocery stores and a winter CSA, and teach workshops to other growers. Jonathan’s dad, John, was teaching about winter greens production and spoke of his respect for Eliot Coleman of Four Season Farm in Maine, author of The Winter Harvest Handbook. One of the workshop participants offered to pay for John and his son to fly up to Maine and see Coleman’s farm for themselves.

The Dysingers spent two days working with Coleman and talking about crops and tools. When Eliot mentioned that there was a great need for a better salad harvesting tool, it sparked something within Jonathan. Growing up, he had spent many hours harvesting salad mix himself. “Out there on your hands and knees — I don’t enjoy it,” he said.

The young farmer, who modestly says he “is blessed with mechanical aptitude,” started tinkering with ideas as soon as he got home.

“I tried modified hedge trimmers, electric bread knives, and even made Lego prototypes,” he said. “It was something that was consuming a lot of my brain energy. I came up with several ideas, but they required running long extension cords and getting shocked every time I pulled the trigger.”

As he experimented, it became clear to Jonathan that the main problem with existing greens harvesters was that there was no way to move the greens into the collection basket. “We realized we needed some sort of brush,” Jonathan said. “I tried a feather duster, but that wasn’t wide enough.” After looking around for something that could be used on the harvester, Jonathan eventually made his own brush with knotted rope.

“Two years ago, somebody we know locally who is a retired engineer and avid gardener helped me take my prototype to an actual production model. By February of 2012, I was really pushing to finish up school. We were still working on the harvester but it was on the back burner. Then we got the Growing for Market issue (February 2012) with an article about the Slow Tools Summit.”

That article, written by Josh Volk, recounted a gathering to brainstorm ideas for small-scale farm tools. One person mentioned working on a greens harvester and it motivated Jonathan to get back to work on his version. He contacted Coleman and Adam Lemieux, the product manager for tools at Johnny’s, and arranged to travel to Maine again at the end of March to demonstrate his harvester.

“My dad and I made the 25-hour drive to Eliot’s farm and did the demonstration,” he said. “That was an awesome experience, coming up with a product Eliot’s been wanting for years.”

Lemieux agreed to buy the greens harvesters, and expressed the desire to include them in the Johnny’s catalog to be published in mid-November.

The heat was on. The Dysingers turned around and drove home the next day and Jonathan started trying to raise money to build a production facility. He received funding from members of a Slow Money chapter in Tennessee, from his family’s CSA members, and from another farmer. On October 20, funding completed, he ordered equipment and materials. He established a separate company, Farmer’s Friend, LLC, to manufacture the tools in a 6,000 square foot workshop newly built on the farm.

Lemieux said that he, Coleman, and others had been trying to develop a better greens harvester for years. “Jonathan went off and did just that. He returned to Harborside in March of this year with an ingenious design that just blew us away.”

Production has begun and Johnny’s already has back orders for the $495 greens harvesters. Jonathan expects to be able to make 50 to 100 harvesters per month once he reaches full production capacity.

Eliot Coleman recalled his first meeting with the 15-year-old.

“He was interested in tools and asked what tools we hadn’t succeeded with yet,” he said. “I showed him our drawings of the so-far-unsuccessful small motorized harvesters and encouraged him to go for it. The reason his model works and our previous ones failed is because he was smarter than us and realized that it needed more than just sharp blades. So he came up with that ingenious macrame cord brush which pushes the greens into the blades and into the basket. Pure genius. Cuts light crops as well as heavy crops. Cuts high as well as low. The kid did good.

“It’s fascinating how often just throwing a new mind at an old problem is all that is necessary. And now he has his own factory to produce them. I am very impressed.”

Jonathan doesn’t plan to rest on his success.

“I’m viewing this business as something I’m going to be doing a long time,” he said. “I have a long list of problems I’d like to solve on our own farm.” 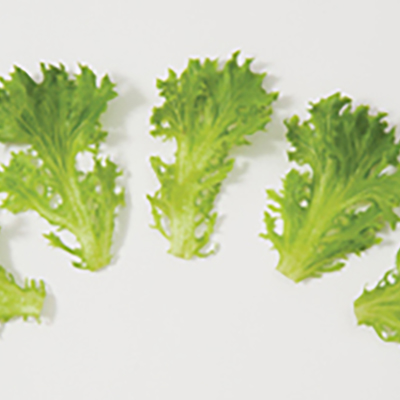 There is a new kind of lettuce that could change the way you grow salad mix. You may have noticed it while looking through seed catalogs this winter. It goes by several trade names including Eazyleaf, Multileaf and Salanova. Available to the large-scale bagged salad mix industry for a few years, it is available to smaller growers for the first time this year. I don’t think it will ever completely replace densely sown baby leaves, but for many growers, it may have advantages. It is an innovation that offers benefits both for the grower and the eater over the traditional salad mix.