Spotted wing drosophila (Drosophila suzukii) is a fruit fly native to Japan and Southeast Asia that was first discovered in the USA in 2008. This invasive insect pest attacks a wide range of berry crops including blackberries, blueberries, boysenberries, raspberries, strawberries, and grapes. Wild berry crops, and mulberries and elderberries may also be attacked. In addition to berries, spotted wing drosophila will attack fruit trees such as apples, nectarines, peaches, and plums. Adult populations increase in mid-to-late summer and may remain abundant throughout early fall as berries and fruits ripen. Late-season crops are especially susceptible to attack. Spotted wing drosophila is not a quarantined or regulated pest. 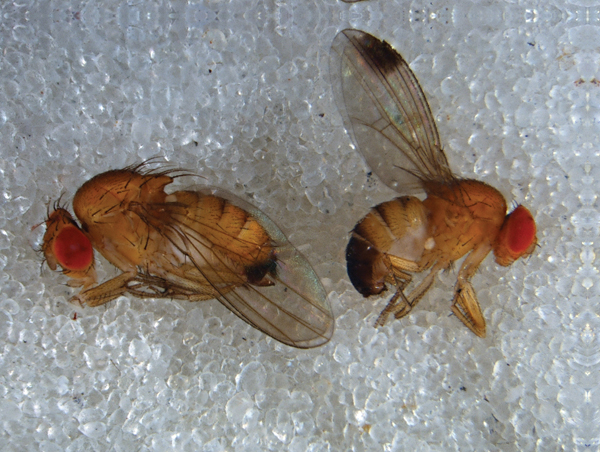 The male spotted wing drosophila is on the right, and the female is on the left.

Spotted wing drosophila looks like other native fruit flies. Adults are 2.0 to 3.0 mm (1/8 inch) long with red eyes, a yellow-brown thorax, and black stripes on the abdomen. Adults are active during the day, preferring moist conditions and temperatures between 20 and 21ºC (68 and 70ºF). Spotted wing drosophila males can be distinguished from native fruit flies by the presence of a spot near the tip (outer edge) of each wing and two dark bands on the front legs (Figure 1). Female spotted wing drosophila do not have a spot on the wing but can also be distinguished from other native fruit flies by the large, saw-like ovipositor used for laying eggs, with two rows of serrations (Figure 2). This allows females to pierce the skin ofunripened, immature fruit to deposit eggs. More than one egg may be laid into each berry or fruit. 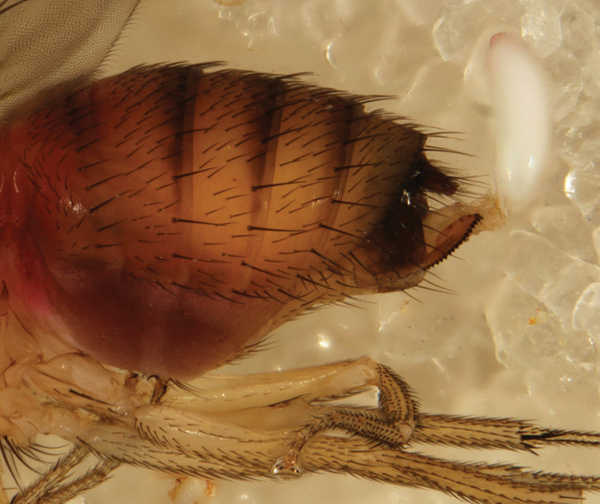 A closeup of the serrated ovipositor on the female. Photos by by Elizabeth Everman of Kansas State University.

Life Cycle
Adult females live about two weeks and may deposit between 100 to 300 eggs from spring through fall. The life stages are an egg, larvae, pupa, and adult. The time required to complete the life cycle depends on temperature with warmer temperatures tending to reduce the time needed to complete the life cycle. The larvae typically pupate inside fruit, but they may also pupate outside the fruit unlike native fruit flies. Also, unlike native fruit flies, spotted wing drosophila females attack healthy, ripening berries or fruit as well as damaged or split fruit. They are less likely to attack damaged or rotting fruit. Darker colored fruit, in general, is more susceptible to attack. Moreover, females prefer to lay eggs in thin-skinned berries or fruits. Spotted wing drosophila females may attack berries and fruits throughout the growing season. Spotted wing drosophila overwinters as an adult, and the severity of winter conditions may influence survival.

Monitoring
Traps can be used to monitor spotted wing drosophila adult populations and help time insecticide applications. Because spotted wing drosophila is attracted to ripe, not overripe, berries and fruits, traps should be placed into fields when fruit starts to color. Once berries or fruit ripen, they become less attractive, and native fruit flies may be captured instead. Contact your local or state extension specialist regarding the type of trap that may be used to monitor for adult spotted wing drosophila. In order to detect larvae in berries conduct a salt test weekly. This involves placing a fruit sample into a plastic bag with warm salty water and waiting approximately 15 minutes to assess if any larvae are present.

Management
Spotted wing drosophila populations can be managed by implementing cultural and sanitation practices throughout the growing season. This includes harvesting berry and fruit crops early, and removing and destroying overripe, infested, or culled fruit. It is important to prevent infestations by removing wild host plants such as grapes, blackberries, raspberries, American pokeweed, crabapples, dogwood, and Japanese yew from nearby locations in order to keep the fruit of these plants from serving as reservoirs for spotted wing drosophila populations during the growing season.


Raymond Cloyd is Professor and Extension Specialist in Horticultural Entomology/Plant Protection at Kansas State University. Contact him at rcloyd@ksu.edu 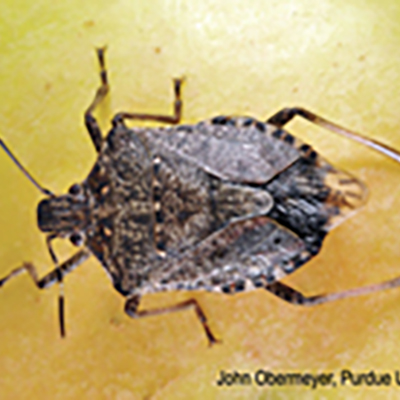 New, devastating stink bug is spreading across the U.S.

The Brown Marmorated Stink Bug (BMSB) is an invasive species that is emerging as a serious problem. It is thought to have arrived on the East Coast from Asia and has been officially documented in 33 states. It has over 300 host species, causes tremendous damage, and so far, has no reliable methods of control, organic or otherwise.

Caterpillars are the larval or immature stage of moths and butterflies, and may be major insect pests of high tunnel and outdoor organically grown crops. During summer through fall, moths can lay eggs that hatch into caterpillars. Caterpillars have chewing mouthparts and will feed on a variety of vegetable and ornamental crops. In fact, herbaceous plants such as annuals and perennials located outdoors are highly susceptible to attack by caterpillars. If left unchecked, caterpillars can severely damage crops. 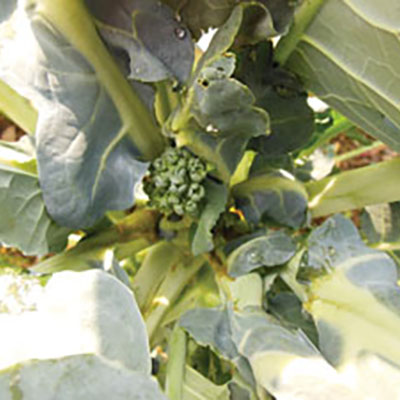 Finding a new pest and a silver lining

The first time it happened, we thought it was just a fluke. The second time, we knew we were being menaced by some sort of phantom. Then home gardeners started to stop by the market and ask us the same question we'd been asking ourselves: “Why don't my broccoli plants have any heads?”  And by then we knew that there was a widespread problem starting to brew. There's a new pest in town and it’s a tough one! 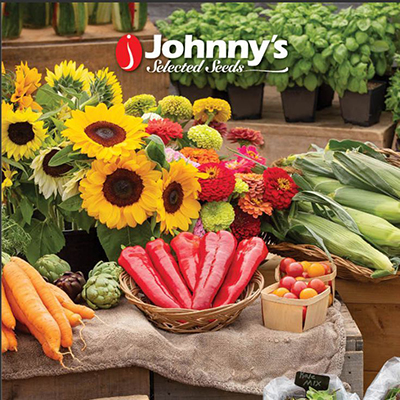 Scouting for Pests and Diseases

One of the fringe benefits of weeding is that while you are out there hoeing or hand pulling weeds, you can monitor crops for any signs of damage from pests or diseases.

Once crops have been harvested, it's time to clean up the remains. Field sanitation consists of plowing down, composting, or otherwise removing plant debris, and mowing adjacent areas. Flowering plants can be left to provide seed for birds, but otherwise plants should be removed from the soil surface to prevent overwintering of pests and diseases.