This article originally appeared in the January 2016 issue of Growing for Market Magazine.

Last month, I wrote about growing and marketing baby ginger. This month, I’ll tell you about turmeric, a crop that is often grown as a companion to ginger. Although turmeric is generally grown the same way as ginger, that’s where the similarities end. Turmeric has different germination and harvest requirements, projected yields, and financial margins. Marketing a product that most people don’t recognize, having never seen it as anything but a yellow powder in a spice bottle, also takes much more effort.

Turmeric, Curcuma longa, is in the ginger family and is native to Southeast Asia, where it is an important culinary ingredient. More recently, it has gained a reputation for various health benefits such as antibacterial, anti-depressant and anti-inflammatory qualities. The potential market for fresh turmeric includes both culinary and health buyers. 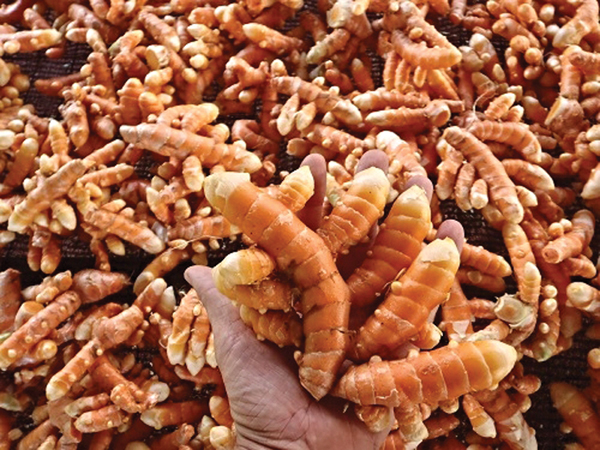 Turmeric needs 11 months from planting the rhizomes to harvest. In temperate areas, therefore, it has to be grown in a greenhouse or high tunnel and protected from frost. It should be started earlier than ginger, and it should be left to mature longer than ginger for the highest medicinal value.

Daniel Kelly of www.HawaiianOrganicGinger.com supplies seed rhizomes for both ginger and turmeric. He advises that turmeric “is a little shyer to sprout” than ginger. “I recommend letting the rhizome dry out 5-10 percent after you receive it. Then, when you put it into a moist environment, it will sprout. A higher starting temperature and letting it dry out a little before planting will trigger it to sprout earlier. You’re simulating nature a little.”

Turmeric also can withstand higher summer temperatures than ginger, he said. “It’s more like an eggplant compared to a tomato,” he said.

Turmeric looks different, too. Whereas ginger has thin, straplike leaves, turmeric has broad leaves, which can be used for wrapping fish or meat for cooking.

“The main difference in the growth habit is that ginger rises like antlers growing up, and turmeric grows like fingers growing down,” he said. “Only when it has filled up all the space downstairs does it spread.”

Kelly grows turmeric for the wholesale market, especially to health food stores across the U.S. He says that turmeric is less expensive to grow and not as finicky as ginger. However, it does require a little more work in harvesting and processing because the rhizomes are smaller and need more washing.

Bill Cox of Casselmonte Farms in Virginia sold 50 pounds of turmeric last year at farmers markets for $12 a pound. His customers were juicers.

“No one here has tried to develop a market presence but the health benefit has created interest. For 2016 we are expecting to grow about 100 pounds, so we will have to make some type of marketing effort,” he said.

You don’t need a high tunnel to grow ginger

Local and organic ginger is a high-value crop that in the right market can be in high demand. Growing this tropical crop in the Midwest can be a challenge, and thus far, farmers thought they had to own a high tunnel to ensure adequate heat during the variable spring and fall seasons. High tunnel space on most farms is at a premium, so it is expensive space to devote to a long-season crop.

This was the predicament for Melissa Driscoll of Seven Songs Organic Farm. Melissa was growing ginger as part of a four-year crop rotation in her high tunnel. She found a healthy market for ginger and wanted to expand production outside of the high tunnel, not only to save on the expense of building a new tunnel, but also to more easily rotate where ginger is grown throughout her farm. 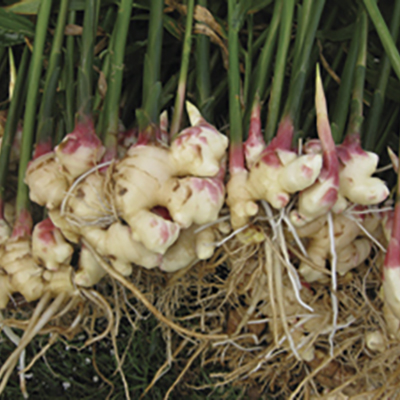 The lure of ginger Growers love it, but it’s not easy

By now, you no doubt have heard about growing ginger in a high tunnel. Growing for Market first reported on this new crop in 2008, when Massachusetts farmers Missy Bahret and Casey Steinberg wrote up the results of their SARE-funded research for GFM. Over the years, we have run several other articles about growing ginger. Most have focused on how pretty it is, how excited customers get about it, and how much you can charge per pound. 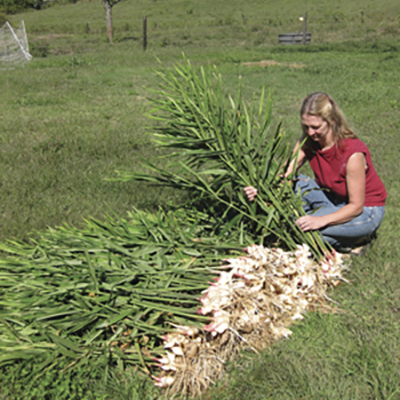 Pink – A new color for a new food crop

There is a new crop on the scene and the Wiedigers just HAD to get on the bandwagon! The new crop is ginger. That’s not new, you might think. But wait, this is not the same as that fresh ginger you bought at your favorite produce counter — ginger with a tough outer skin and lots of fiber inside, making skinning and grating it a challenge. Oh no, this is something entirely different. This is a tender, skinless, almost fiber-free ginger, and, wait for it, beautifully pink and white!