Recently someone posted a question about choosing cucumber varieties to the Growing for Market Facebook page. Here's the question:

Trying to figure out what kinda of cucumbers to grow this year. I want to expand beyond growing basic American standard slicers. Johnny's and High Mowing have English type cucumbers that are extremely pricey. I would consider buying them, however I also see that Johnny's has a variety called Tasty Jade, that looks like the English varieties but is about a 10th of the cost. Tasty Jade is called an Asian cucumber even though it looks just like and is described just like the English cucumbers in catalogs. Can anyone tell me what the difference between the tasty jade and English varieties like Tyria or Kalunga would be, and give me advice an which one would be better?

Cucumbers are near and dear to my heart. I love growing them, eating them and for seven years I did the cucumber trials for Johnny’s Selected Seeds. As one of the main greenhouse crops, I wrote about them extensively in my book, The Greenhouse and Hoophouse Grower's Handbook. So, here are my thoughts on your question.

It’s a great idea to branch out. American slicers are the cukes that I grew up eating, but flavor-wise there are better varieties out there. There is a reason American slicers are often peeled. The thick skins that make them durable for shipping detract from the eating quality.

Though Asian cukes like Tasty Jade or Tasty Green from High Mowing Seeds look a lot like the English/long European types that are often found wrapped in plastic in Grocery stores, there are some important differences.
For one thing, the European cukes are completely spineless, whereas most of the Asian cukes, including Tasty Jade, just have reduced amounts of spines. Look closely at the pictures of Tasty Jade and you will see spines. One thing that the European and Asian cukes share is that they all have thin skin, which improves the flavor and reduces shelf life.

Spines are not only a culinary consideration, they are also a post-harvest consideration. If you are throwing spiny cucumbers in a bin as you harvest them, they may puncture the skins of the other cucumbers. This will cause the cukes to dehydrate more rapidly. So there are good reasons for the eater and grower both to prefer spineless cukes.
The other big difference between Tasty Jade and European cukes is that most European cukes are parthenocarpic and gynoecious, whereas Tasty Jade is just parthenocarpic.

These are two very specialized terms relating to cukes that are worth defining before going any further.
Parthenocarpic means that the plant will set fruit without being fertilized. Most cucurbits (the squash family including cucumbers) won’t set fruit unless it has been pollinated. This is because these plants don’t realize they are making tasty food for you, they think they are passing their genes on. So most cucurbits won’t invest energy in producing fruit unless that fruit is pollinated, with a chance to pass genes to the next generation.

This is important, for greenhouse and hoophouse growers because pollinators may not make it all the way into the center of greenhouses and hoophouses, particularly larger ones. The other thing that may be going on in protected culture is that you may be excluding pests with insect netting, which will also keep pollinators out so of course your cukes won’t get pollinated.

Being parthenocarpic can also be an asset for field growers. Many field cucumber growers that use floating row cover to deter cucumber beetles or other pests take it off when they see the yellow flowers so they can get pollinated. Field growers using parthenocarpic varieties can leave row cover on until harvest.
So Tasty Jade is parthenocarpic, but not gynoecious. Gynoecious means the plant has only female flowers. This is important because most cucurbits have male and female flowers. But the female flowers are the only ones that turn into cucumbers. In fact you can tell the female flowers because they have a little cucumber at the base of the flower, which is what develops into the cucumber.

Being gynoecious is important because it increases yield. Think about it: if half the flowers on the plant are male, which will never produce a cucumber, and you have another plant that is all female flowered, the all female (gynoecious) plant has twice the yield potential.

The other factor to consider, whether looking at Asian cukes or long European cukes, is that both of these types, because they are so long, tend to curl when grown on the ground. If you and your customers don't care about this, then it’s not a problem. But many markets, especially wholesalers, consider curly cucumbers less or un-marketable. It is harder to cut up a curly cucumber.

My advice to you? Try Socrates. Johnny’s and High Mowing both offer it. Whereas long European cukes are about a dollar a seed, Socrates is about 50 cents a seed. I have trialed and grown Socrates for many years. It is delicious parthenocarpic, gynoecious, and high yielding. It has all the flavor and growing benefits of the long Europeans, being spineless, thin skinned, parthenocarpic and gynoecious.

The other thing that I like about Socrates is that it can do double duty. If you pick it shorter, in the 4-6 inch range, it can be sold as a snacking cuke- the size that kids like to eat out of hand. If you pick it in the 7-9 inch range, it looks like a slicer, though it has the improved flavor and lack of spines of the long European types.

Keep in mind that the combination of being parthenocarpic (set fruit without pollination) and gynoecious (all female) will increase the yield of these cucumbers. So in my opinion, paying a little more for the seed will pay you back in the end.

Ultimately, I’m not trying to sell you Socrates in particular. Though that is what I thought of in response to your question. The point is to understand the difference between the types, and why parthenocarpic AND gynoecious varieties tend to cost more (more specialized breeding, and higher yield potential = higher value in the seed). Understanding those distinctions will allow you to decode the catalog description of future varieties, and make an educated guess for yourself as to what variety is going to fit your needs.

At current pricing Tasty Jade and Tasty Green are about ten cents a seed, Socrates is about 50 cents a seed and Tyria/Kalunga are close to a dollar a seed. I encourage you to think about it this way:

How much do you sell a cucumber for? A dollar retail/50 cents wholesale? If you get one or two more cucumbers off a Socrates or Tyria/Kalunga plant than Tasty Jade/Tasty Green, you’ve made up for the price difference in the seed. Since the parthenocarpic/gynoecious varieties (Socrates and Tyria/Kalunga) tend to be higher yielding, anything beyond that is additional profit that you wouldn’t have made off a variety with cheaper seed.

But don't take it from me. Try it for yourself. Get some Tasty Jade/Tasty Green, and some Socrates or one of the long Europeans. I would never advocate anyone switching completely over from their old favorite variety in one season. If any of the varieties mentioned in this article or a seed catalog intrigue you, try some this year.

Having a few different varieties next to each other to compare will really make the differences stand out. I bet you anything at the end of the day your harvest totes will have more of the other varieties than Tasty Jade or Tasty Green. And then you will know whether the more expensive varieties are worth it or not for you next year.

Andrew Mefferd is the editor of Growing for Market magazine.

For more about growing cucumbers and choosing varieties, see the author's book, The Greenhouse and Hoophouse Grower's Handbook.

We have three main seasons in our zone 7 central Virginia hoophouse: fall-winter (October to March), spring-early summer (March to July) and high summer (August and September). We grow one bed (90’/27.5 m or so) each of yellow squash and bush cucumbers in the spring-summer season, for reliable early harvests and to help with crop rotation. If you farm in a colder climate than ours, you might be questioning allocating the precious real estate to a crop that so quickly goes from desirable to over-abundant, especially when there are more profitable things to give the space to. One reason is a difference between southern and northern climates.

The best cukes for hoophouses 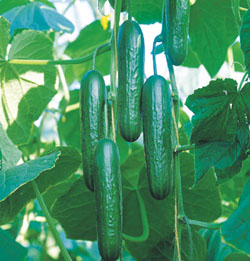 Cucumbers can be a valuable crop when grown in a high tunnel. Like tomatoes, they are grown vertically on a trellis or string, so the yield per square foot can be impressive. The protected environment of the high tunnel allows for early and late production, and insect screening may thwart cucumber beetles in locations where the insects are a serious problem. Cucumbers can be grown in spring with tomatoes, or they can be the second crop after tomatoes, when tomato prices fall in mid summer.
Read More

Cucumbers: Easy except for the pests, diseases 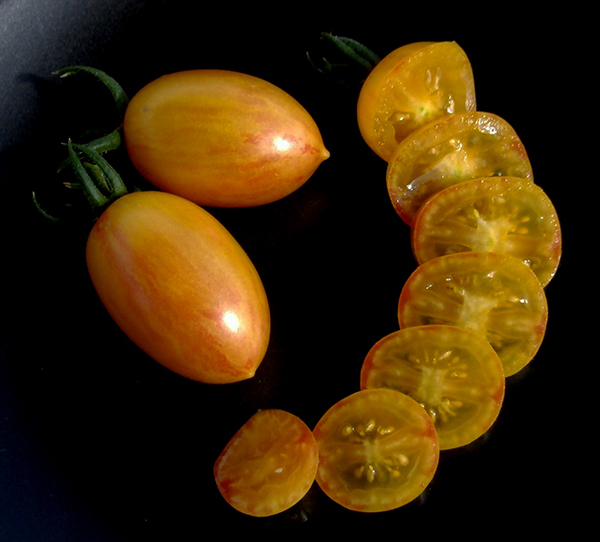 Tomatoes are a high-value crop for many farms and having tomato varieties that match the farm site and the local markets is of critical importance to many of us who farm. Fortunately, there are many varieties we can choose from today, and trialing new varieties that become available is an important way to find varieties with good production and high value. Additionally, we can also fine-tune what we grow on our farms using simple breeding practices. Here I provide some simple advice on how to select and create varieties suited to your farm.

Almost everyone wants tomatoes! The range of colors, shapes and flavors is enormous. The taste of a fresh-from-the-vine, unsprayed tomato is infinitely better than that of a tired, much-traveled industrial tomato. Although this crop practically sells itself, it might not be easy money: tomato production can be labor-intensive — 350 hours per acre — and then there is a range of pests and diseases to avoid.
Read More