Trap boxes for the scourge of winter growing- voles

I’ve seen a few posts recently showing vole damage and one asking for suggestions on controlling voles, and winter is prime time for voles in the field and in tunnels. Years ago, I read something by Eliot Coleman mentioning using boxes for setting the traps in and recommending Better Mouse Traps by Intruder. The combination worked really well for us. 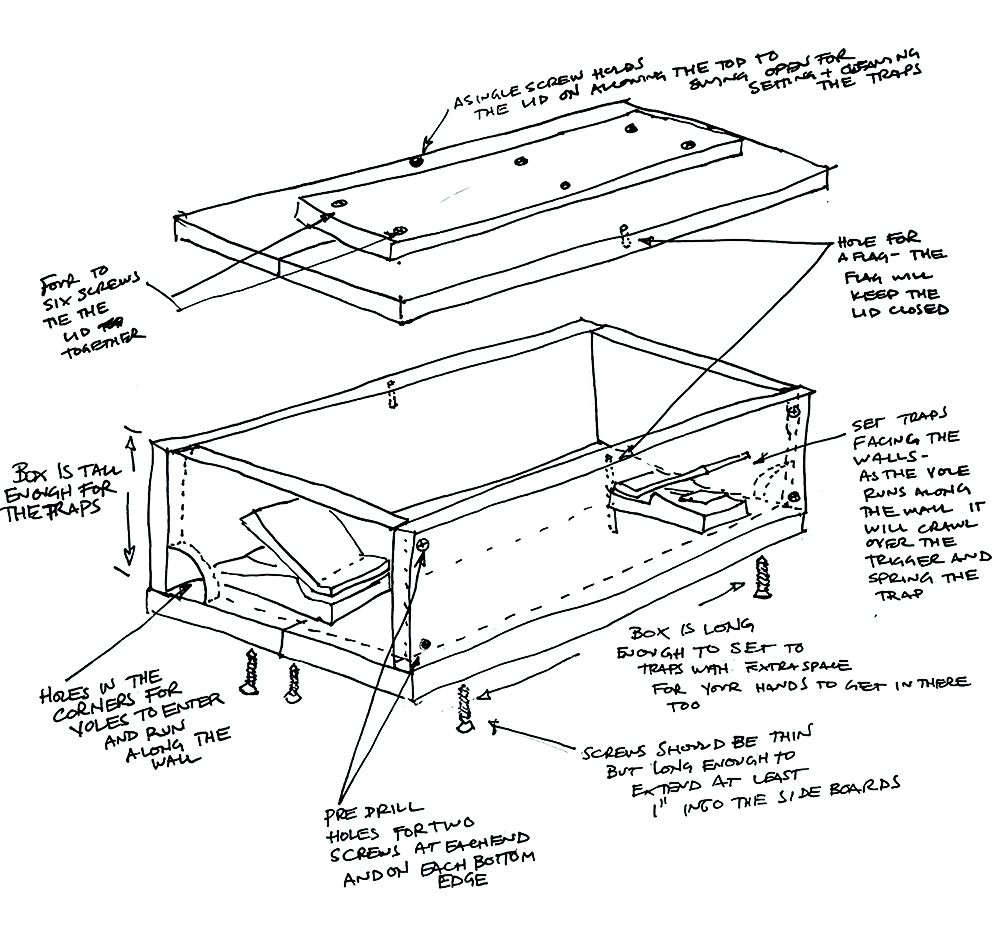 The author’s trap box diagram. All images courtesy of the author.

The advantage of the Intruder traps is that they are very easy to set and to empty. At this point I’ve seen a few others that are similar, maybe even better, like the Tomcat Press ‘N Set, but I haven’t tried them myself. The weak point for the Intruder traps is that the tracks for the spring get worn and over time the trigger becomes overly sensitive. I don’t love that they’re plastic, but it does keep the price down. I’ve also used the classic Victor traps and while they’re harder to set and empty they work, too.

Putting the traps in a box, and how you set the trap in the box makes a huge difference. Voles and mice like to crawl into dark spaces and then they travel along walls, not in the open, exposed spaces. A box with a hole in the side is an inviting refuge for the vole and once inside they’ll simply travel along the wall. If you set the trap facing the wall they’ll run right over the trigger. We never bait our traps, we just set them with the trigger facing the wall. We put two holes in opposite sides of each box, and a trap by each hole. We don’t always catch two voles, but it does happen. 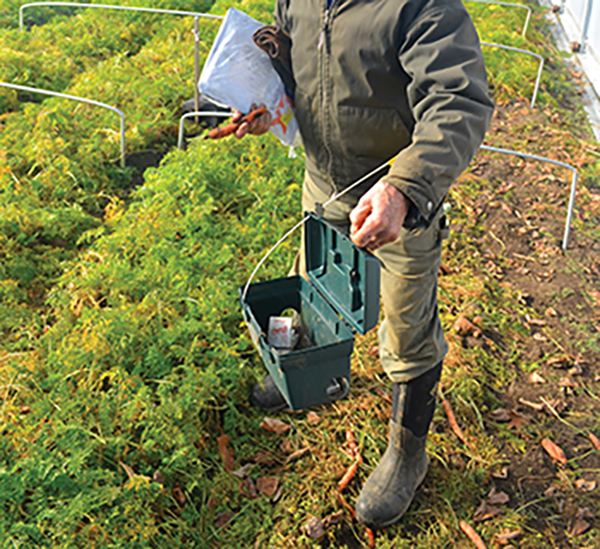 You can see the open box with holes drilled in the sides for the voles and traps sitting next to the holes.

The box has a couple of other benefits: they work under row cover that’s not held up with hoops; they keep the traps from being triggered or dragged off by other animals; they keep the dead voles or mice dry which makes emptying the traps slightly less unappealing; and they’re easier to find, especially when you use an irrigation flag to mark their location.

Here’s a sketch of the kind of wooden boxes we built. I use whatever scrap is handy and find 1” x 4” or fence boards which are about 5/8” x 5 ½” good sized lumber to work with. They make boxes that are plenty durable, and not too heavy to carry around. I don’t treat the wood, and I usually use thin, #8 coarse thread drywall screws to put them together, although any screw should work with a predrilled hole, or even nails or staples. At a minimum you want the box to hold a trap or two, and you’ll be happier if there’s plenty of room in the box to make it easy to set the trap in it without contorting your hand. I find something about 6x8” to 8x10” a good size, but exact dimensions depend on the materials I’m starting with. 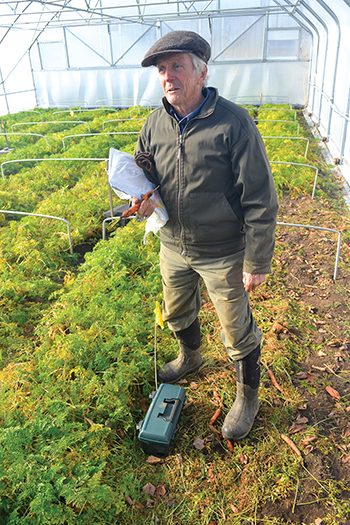 The box just sits on the ground and an attached flag makes it easy to find for checking and emptying the traps regularly.

When I visited Eliot Coleman and mentioned how well the boxes worked for us, he showed me the plastic tackle boxes they were using at the time. Again, I don’t love that they’re plastic, but they’re inexpensive, light weight, it’s easy to put holes in the sides, they come with a convenient carrying handle, and you can just buy them off the shelf, no need to build your own if you don’t want to.

The other key to effective trapping is to pay attention to where the voles are and to check and reset the traps regularly. We would empty the traps when we caught voles, but unless they were super dirty we don’t actually clean them, working on the theory that the vole scent would attract more voles to the traps, and that does seem to work.

Josh Volk farms in Portland, Oregon, and does consulting and education under the name Slow Hand Farm. He is the author of the book Build Your Own Farm Tools and Compact Farms: 15 Proven Plans for Market Farms on 5 Acres or Less, both available from Growing for Market. He can be found at slowhandfarm.com.